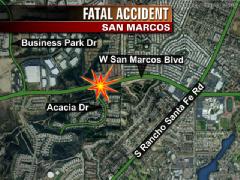 A few years ago there was a lawsuit arising from an auto accident at that intersection, and yesterday a 19-year-old Encinitas man was killed while riding as a passenger in a 2004 Jeep Loredo that, according to reports, was speeding on San Marcos Blvd. The Jeep was traveling eastbound, and ran a red light at Acacia. The Jeep seriously injured the driver of car trying to turn left onto westbound San Marcos Blvd. Hopefully, the injured (and apparently innocent) driver of that car makes a full recovery.

More on the accident can be found here.

UPDATE [8/30/08]: It is being reported in the North County Times this morning that the driver that ran the red light has been arrested for manslaughter and drunk driving. The woman who was hit in the intersection reportedly suffered only minor injuries.

For a free consultation about any San Marcos personal injury matter, call the San Marcos accident lawyers at Walton Law Firm LLP at (760) 607-1325.