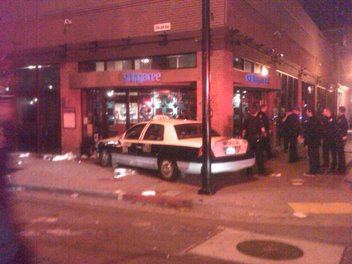 Six pedestrians were critically injured, and nearly 20 more hurt, when a taxi driver drove his cab onto a curb and plowed into a crowd leaving a night club in the Gaslamp District. The force of impact amputated one woman’s leg below the knee.

According to reports, the Emerald Taxi cab was heading south on Sixth Street around 2 a.m. when it suddenly, and for no apparent reason, veered onto the sidewalk and into the crowd. The taxi came to a rest near the front doors of the Stingaree club on the corner of Sixth and Jarvis. People in the crowd attacked the driver, who suffered a broken nose and was also hospitalized.

Police aren’t sure what caused the driver to veer into the crowd, but early indications are that it may have been intentional. Police said alcohol was not likely a factor, but one witness said that the driver “seemed to be out of it.”

The injured will likely have a viable personal injury case against the driver of the cab and the company he works for. But considering the number of victims, it is doubtful the company will have sufficient insurance, particularly considering there is an amputation, which can be very high value cases. The investigation is ongoing.

Here is some raw video taken from the scene: