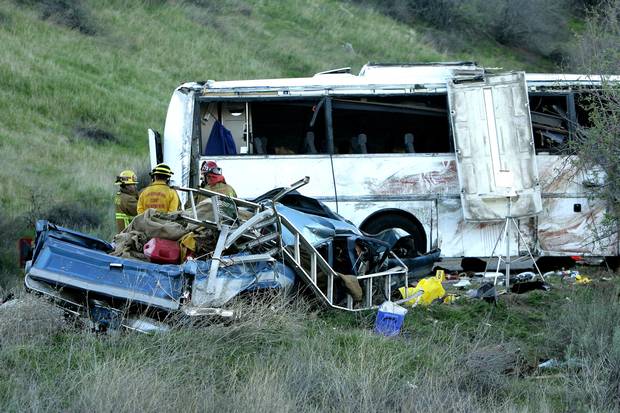 A tour bus carrying 43 passengers rolled over yesterday on Highway 38, just north of Yucaipa in San Bernardino County. According to reports, the bus, registered to a company called Scapadas Magicas LLC in National City, was traveling down a slight grade when the driver stated he was having difficulty braking. At around 6:30 p.m. it rear-ended a Saturn, and then rolled over.

News accounts state that seven people were killed in the accident, and at least 17 suffered serious injuries.

Both the coroner and the California Highway Patrol’s multidisciplinary accident team was on the scene throughout the night in what some law enforcement officers are calling the worst crash they have ever seen.

“You have victims that are inside the bus, outside the bus, a lot of personal property, a lot of physical evidence at the scene,” CHP spokesman Mario Lopez told ABC8. “It’s just one of those scenes that really make you think.”

Scapadas Magicas LLC, the owner of the bus, is registered with the United States Department of Transportation, and has a satisfactory rating. In California, any vehicle for hire, especially those used to carry passengers, are held to a higher safety standard than the typical automobile. That standard is called “common carrier” liability, which requires the company to use the “highest care and the vigilance of a very cautious person.” Under California law, the Scapadas Magicas LLC must do all that it can do under the circumstances to avoid harm to passengers or property, including keeping the bus in safe working order. It appears this investigation will focus on the bus’s braking ability.

If early reports are true, and the brakes failed on this Scapadas Magicas bus, those who suffered injury, including the heirs of those killed, will have a strong case of negligence against this San Diego company.

UPDATE: The Los Angeles Times is reporting that Federal safety inspectors recently found numerous safety violations in the vehicles owned and operated by Scapadas Magicas. The National City company was even placed on a federal watch list that flagged busses for more regular roadside inspection.

Among the safety violations discovered were insufficient brake linings. Survivors of the crash are now telling a story of brake failure as the tour was traveling on a downhill grade.

The Walton Law Firm is a respected personal injury law firm with offices in San Marcos, and downtown San Diego. For 15 years, Randy Walton has been representing individuals and families in cases of personal injury and wrongful death throughout Southern California. Consultations on all cases are free.