An explosion at a home on Wooden Horse Trail in Murrieta has killed a utility worker and injured at least a dozen others. The explosion leveled the home completely.

News reports state that a contractor working on the house damaged a natural gas line, requiring the presence of Southern California Gas Co. workers. Apparently, the contractor was working on solar panels on the home. The explosion killed one of the workers the other was transported to the hospital.

All others injured were transported to the hospital for evaluation. 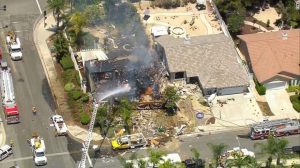 Based in North County San Diego, Walton Law Firm is a respected personal injury law firm whose injury lawyers represent individuals and families in San Diego and Riverside County impacted by accidents of all types, including construction and industrial accidents. Consultations for cases are always free of charge. The firm can be reached at (760) 571-5500.

Update (7/16/19): It is being reported that the Southern California Gas Company employee who died in yesterday’s explosion in Murrieta was 31-year-ol Wade Kilpatrick. Mr. Kilpatrick was a longtime SCGC employee and leaves behind a very large family.

An ongoing investigation into the incident has revealed that the explosion was connected to a gas leak that Mr. Kilpatrick was attempting to repair on the property that had been damaged by a private solar contractor.  According to SCGC, the contractor did not call 811 to determine if there were any utility lines nearby. This report suggests that the solar company might have some, if not all, the liability in any claims or lawsuits that might arise from the incident.